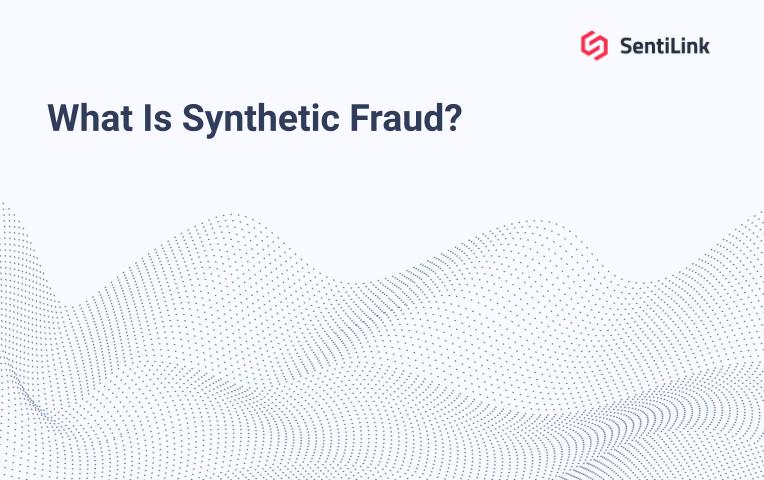 Synthetic identity fraud is the fastest growing type of financial crime in the U.S., often goes undetected and costs financial institutions an estimated $2B a year in losses.

Technically, there are two types of synthetic fraud, one where someone manipulates their identity, and another where an identity is totally fabricated. In its simplest form, a synthetic identity is one where the name, date of birth and social security number don’t correspond to any real person. That synthetic identity can then be used to apply for credit, just as any other person would.

How do you create a synthetic identity?

Synthetic identities are surprisingly easy to create. It’s as easy as taking your own name, date of birth, and any nine digit number that looks like a Social Security number and applying for a loan. While you will get declined for that initial loan, the act of applying for credit will create a record at the credit bureau with that name, date of birth and made-up Social Security number. That newly created record is a synthetic identity.

Or, there are a variety of shortcuts. One is authorized user tradelines. These have been available on credit cards for a long time. It’s common for parents to list their teenage kids as authorized users on their credit cards so their kids can have access to higher credit lines and lower pricing.

Non-reputable credit repair agencies are another tactic fraudsters use to increase the credit score on their synthetic identities. There are a host of companies that are magnets for fraudsters looking to quickly season their synthetic identities. They look like online retailers, but are actually a type of credit repair agency. AG Jewelery is one example. They appear to be an online jewelry store, but, in reality, offer a $10,000 unsecured line of credit to anyone who applies. They even admit in writing that they “don’t do a soft or a hard credit pull” of anyone who applies, which essentially means that nearly anyone who applies is likely to get approved. They are, in effect, enabling fraudsters to buy tradelines in order to boost their score and look more creditworthy to other financial institutions. Once the synthetic identity has a high credit score, fraudsters apply for loans at legitimate lenders that they never repay, or “bust out.” After busting out, the most bold fraudsters then engage in credit washing.

What is Credit Washing?

Credit washing is a related form of fraud where an individual removes derogatory information from their credit report by lying about being the victim of identity theft. After doing so, their credit score can jump 200-300 points, so they can then trick lenders into issuing them credit that the lender never would have provided to somebody with as many missed payments, charge-offs, or other negative information.

In sum, there are four phases to synthetic identity creation. There’s the process to create the fake identity, then a period to build credit, followed by the bust out phase once the credit score has increased enough so the fraudster can get approved for several high dollar loans or credit cards (and not pay them back). The culmination is the credit washing phase where the fraudster claims to be the victim of identity theft so they can get the chargedoff tradelines deleted from their credit report, and they can use that synthetic identity all over again to apply for credit. 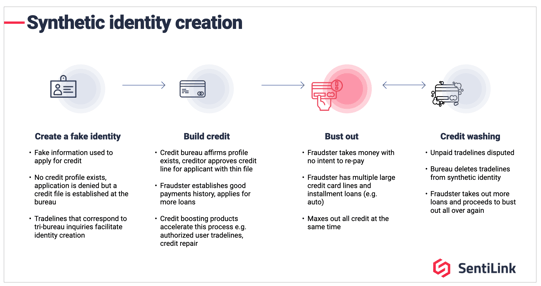 How do you identify a fake identity?

Identifying a fake or synthetic identity is tricky because a synthetic identity allows a criminal to circumvent the identity controls implemented in response to banking laws governing U.S. financial institutions. Most financial institutions follow Know Your Customer guidelines which simply require them to match the name, address, DOB and SSN on an application with a record at the credit bureau. As demonstrated above, establishing a new record at the credit bureau is an incredibly simple process, so KYC solutions and processes can’t detect synthetic identities.

Identifying a synthetic identity requires data and insight to determine if the SSN provided belongs to a given name and DOB combination.

SentiLink, for example, provides a score that indicates the likelihood an incoming application is using a synthetic identity.

How does synthetic identity fraud work?

If you suspect someone is using a synthetic identity, one of the best ways to know for sure is to submit the name, DOB and SSN combination through eCBSV or electronic Consent Based Social Security number verification. It’s a real-time service offered by the Social Security Administration that indicates whether the credentials provided match with what’s in their database. Since the SSA issues all SSN’s in the U.S., they are the single source of truth for this information. eCBSV is the most efficient, low cost way to reject synthetic identities in an FCRA compliant way.

For more information on synthetic fraud, check out our white paper on Defining Synthetic Fraud.

If you'd like to talk to a fraud advisor about synthetic fraud, you can reach one of our experts here.