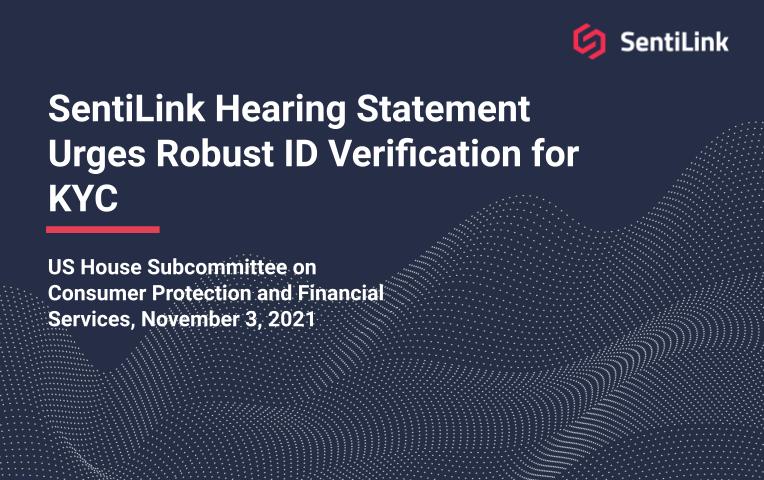 Issues Statement for the Record for Subcommittee on Consumer Protection and Financial Services for Hearing Entitled, "Cyber Threats, Consumer Data, and the Financial System."

San Francisco, CA-- SentiLink, the industry leader in identity verification technology, issued a statement for the record as part of a hearing today in the US House Financial Services Subcommittee on Consumer Protection and Financial Services. The hearing, titled "Cyber Threats, Consumer Data, and the Financial System," focused on a variety of policy issues, including cyber threats, data security and credit reporting.

In its statement, SentiLink provided the Committee insights and data analysis illustrating the increasing threat of synthetic identity fraud and data showing that identity crimes are a widespread problem that impacts the safety and soundness of the banking system, and financial health of US consumers. For example:

SentiLink’s Synthetic Fraud and ID Theft Scores are best-in-class tools to guard against common tactics used by fraudsters using stolen or fictitious identities, and, more importantly, can protect against emerging fraud vectors that traditional identity solutions are slow to detect. SentiLink’s ID Theft Scores offer a new way to target stolen identities used to open financial accounts. They are grounded in a deep understanding of identity theft and the dynamic behaviors and tactics that fraudsters exploit when using stolen identities.

SentiLink was founded by Naftali Harris and Maxwell Blumenfeld in 2017, two former risk decisioning and operations leaders from the online lender Affirm. SentiLink has raised $85M to date from investors and has over 100 partners.