SentiLink Highlights Fraud in the US Government's Pandemic Response 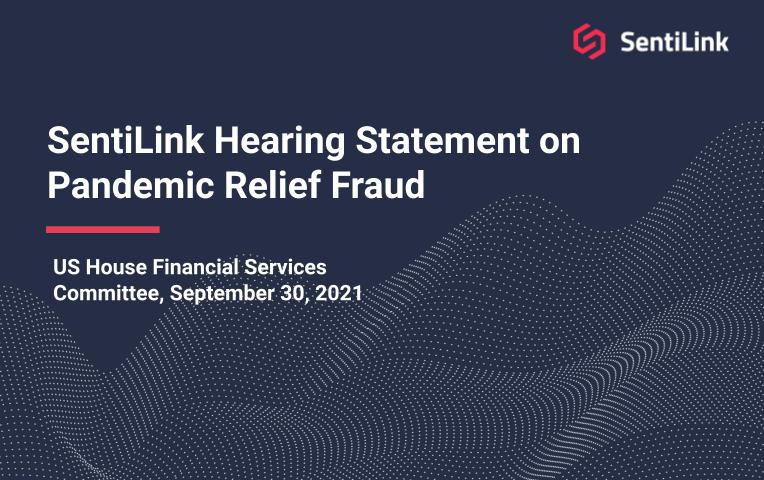 San Francisco, CA-- SentiLink, the industry leader in identity verification technology, issued a statement for the record as part of a hearing today in the US House Financial Services Committee. The hearing, titled "Oversight of the Treasury Department's and Federal Reserve's Pandemic Response," featured the testimony of Federal Reserve Chairman Jerome Powell and Treasury Secretary Janet Yellen. SentiLink's statement highlights the significant role identity criminals played in stealing billions of taxpayer dollars that were disbursed across a wide variety of federal stimulus programs.

"Many people believe that the fraud we’ve seen in these programs was a necessary if unfortunate consequence of the speed at which the government moved to administer them," stated Naftali Harris, Chief Executive Officer of SentiLink. "But while the imperative for speed made fraud prevention more challenging, better technology would have saved the vast majority of the stolen funds and ensured they went to the people and businesses they were intended for."

In its statement, SentiLink provided the Committee insights and data analysis illustrating the role of identity theft and synthetic identity fraud in stealing government stimulus funds meant to support consumers and businesses during the COVID pandemic. For example, SentiLink noted that from September 2020 to June 2021, the percentage of applications for checking accounts identified as using stolen identities increased 187%.

SentiLink’s Synthetic Fraud and ID Theft Scores are best-in-class tools to guard against common tactics used by fraudsters using stolen or fictitious identities, and, more importantly, can protect against emerging fraud vectors that traditional identity solutions are slow to detect. SentiLink’s ID Theft Scores offer a new way to target stolen identities used to open financial accounts. They are grounded in a deep understanding of identity theft and the dynamic behaviors and tactics that fraudsters exploit when using stolen identities.

SentiLink was founded by Naftali Harris and Maxwell Blumenfeld in 2017, two former risk decisioning and operations leaders from the online lender Affirm. SentiLink has raised $85M to date from investors and has over 100 partners.

SentiLink White Paper: The Next Frontier In Financial Crime