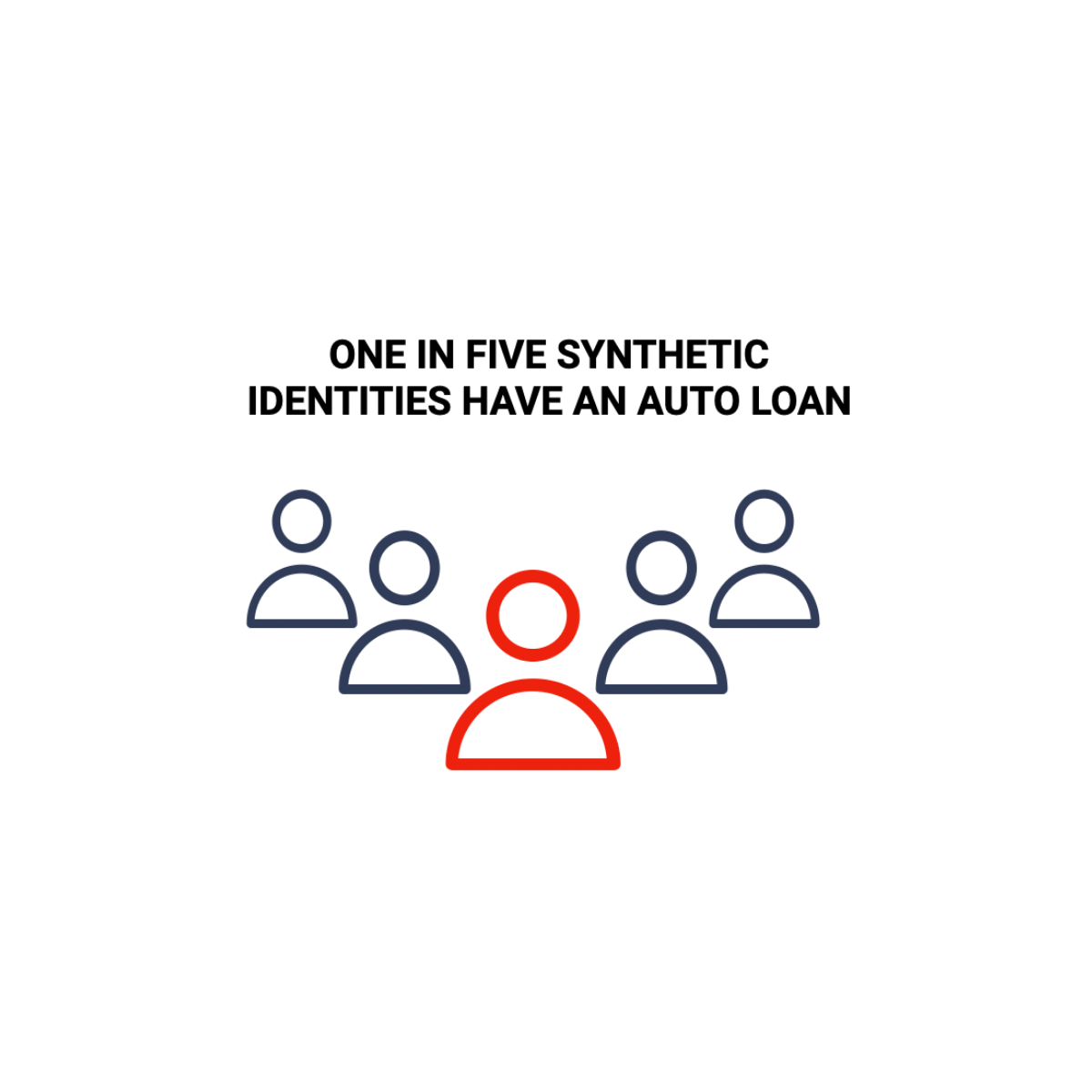 Fraud in auto lending is a well-documented phenomenon. Rather than use a coat hanger to break into a parked car, fraudsters are stealing brand new cars off showroom floors by financing vehicles with synthetic identities and then walking away from the loan. They often ship cars overseas as a means for money laundering or a way to make off with a pricey physical good.

A host of fraud schemes are attempted in auto lending, but synthetic identity fraud accounts for 80% of new account fraud in this space. A synthetic identity is one where the name, date of birth, and Social Security number do not correspond to a single real person. There are two types of synthetic fraud — first party and third party.

With the typical auto loan averaging over $34K, each loan that goes unpaid hurts a lenders’ bottom line.

Why Is Auto Lending A Target For Synthetic Fraud?

We suspect auto lending is a target for synthetic identity fraud because fraudsters have a high likelihood of success, and the large dollar amounts are appealing too.

80% of auto loans are issued in car dealerships, where fraud prevention controls are likely inconsistent and incentives aren’t aligned. Imagine being an employee at a dealership with steep monthly sales quotes. Car manufacturers allocate more cars and better models to the most successful dealerships. There’s constant pressure to meet sales goals to impress manufacturers. It’s also widely reported that dealerships make more money on financing and aftermarket services than on selling cars. Finance managers at dealers are motivated to arrange financing for as many cars as possible, and fraud is likely a secondary consideration.

Not only is there little incentive for finance managers to look for fraud, but the manual processes and outdated technology aren’t flagging the risks sufficiently when used. This has been pointed out by Matthew Pannell, a former special agent with the US Treasury and Social Security Administration. Matthew now owns and operates Prestige Investigations and Consulting where he continues to investigate synthetic identity fraud using skills he developed as a federal agent. In his experience, “lenders rely predominantly on credit files in making identity determinations when in fact they aren’t necessarily the repository for that correct information.”

How Synthetic Identity Fraud Is Committed In Auto Lending

The single biggest contributor to synthetic identity fraud in auto loans is the insufficient identity verification requirements. Auto dealers only require a government issued ID to confirm a borrower’s identity. Most synthetic identity fraud in auto lending is first party, which means a consumer is using their true name and date of birth, but a Social Security number that doesn’t belong to them. The problem with only collecting a driver’s license or passport to confirm identity, however, is that neither ID captures the Social Security number. The dealer confirms the consumer is a real person, but they aren’t confirming that they are using the correct SSN. The best way to illustrate this issue is with the hypothetical example below:

Not only do dealers often have insufficient ID verification, but most don’t verify income either. According to verification company, Lightico, “A paltry 7% of income verification documents are actually validated. The vast majority are simply accepted at face value. In addition, lenders rarely look at applicants’ credit reports.”

At SentiLink, we see anywhere from 30–50 basis points of synthetic fraud in a typical loan portfolio. Auto loans appear to be an attractive target for fraudsters as approximately one in five fraudsters who use synthetic identities have an auto loan. We analyzed the tradelines of over 1,400 known synthetic identities. 74% had a bank or cobrand credit card, 50% had a retail credit card and 22% had an auto loan.

Moreover, we found that 96% of synthetic fraud in auto lending is first party synthetic fraud, where the name and date of birth supplied belongs to the applicant (who can likely supply a legitimate government-issued ID during verification), but the Social Security number is falsified.

Knowing whether synthetic fraud is first or third party drives the potential treatment of applicants. If an applicant is flagged as a potentially first party synthetic identity, then verifying the Social Security number is the best treatment. SSN verification can be done by requesting an SSN card from the consumer (which requires validating the document hasn’t been forged) or checking whether the number exists within the Social Security Administration’s database via eCBSV or SSA-89 form.

We also analyzed the credit reports of 10 randomly selected known synthetic identities where an auto lender had a tradeline listed on their credit report. The analysis looked at several things:

The high dollar amounts issued by auto lenders certainly makes them attractive to fraudsters. The amount of money they can get from an auto lender far exceeds what other creditors are willing to lend. This combined with likely minimal fraud controls at auto dealerships where most loans are issued creates an environment ripe for fraud.

Addressing fraud in auto lending is a work in progress. No one knows this better than Sergeant Darren Schlosser of the Houston Police Department. He specializes in auto finance fraud. He and another detective in the department together investigate about $5M in auto fraud a year. Equally impressive is the amount of “fraud-in-progress” they have prevented. In total, they’ve arrested 59 people who were trying to commit synthetic fraud and were caught before they were able to leave with the vehicle. These 59 “fraud-in-progress” arrests prevented approximately $2.6M in auto thefts.

Sergeant Schlosser not only investigates cases, but he also educates auto dealers and law enforcement personnel about synthetic fraud tactics. One of his courses was aptly named, “How to steal a car with a pen.”